Learning This One Action Will Give Your Rogue Super Powers

Taking the “hide” action is one of those things a lot of players avoid because they’re just not sure how it works. If you can relate to that, please allow me to empower you with an awesome, and totally legit, superpower for your character — especially if you play a rogue that is going to act as the party’s overwatch sniper, like my character discussed in our episode, Firbolg Scout: The Stealthiest Giant.

First, let’s be clear on why you want to hide. Two words: unseen attacker. "When a creature can’t see you, you have advantage on attack rolls against it." -- PHB 194, Unseen Attackers & Targets.

So what does it take to hide? Let’s take a look:

1. Find Cover. Hide is Not Invisibility.

You can’t just hide in plain sight (that’s a Ranger thing, and a sad story for another day). You need to find some cover to hide behind. How much cover? The DMG provides some guidelines, in Vision and Light (pg 183 if you've got paper), which simplified means that you need to be heavily obscured, which translates to the equivalent of at least 3/4 cover. Other circumstances might give away your location, making you “seen”, so not every place you try to hide is going to work. But keep trying. Even darkness will count as being heavily obscured (unless whatever you are hiding from has darkvision).

All you have to do, is move your character behind 3/4 cover and declare that you would like to take the “hide” action. The DM will then ask you to make a Dexterity (Stealth) check, which he will way against the enemy’s passive perception. If your roll beats that number, you are officially hidden. This now gives the enemy, if somehow informed where to shoot even though they’ve lost track of you, disadvantage to hit, plus you gain the +5 to AC from the 3/4 cover. Yes, that’s like super armor. More likely though, they won’t even know you are there, so they’ll attack the tanks in your party instead. You can also hide in any area that is completely dark, and while they will have disadvantage to hit you, you’d gain no AC boost.

If you take the Skulker Feat as an ASI, then it reduces the requirement to just lightly obscured, which includes dim light and 1/2 cover. This should make it even easier to hide.

At any rate, once hidden, on you next turn you shoot. With advantage. And that means if you are a rogue, you get to add your sneak attack damage. Fun stuff. 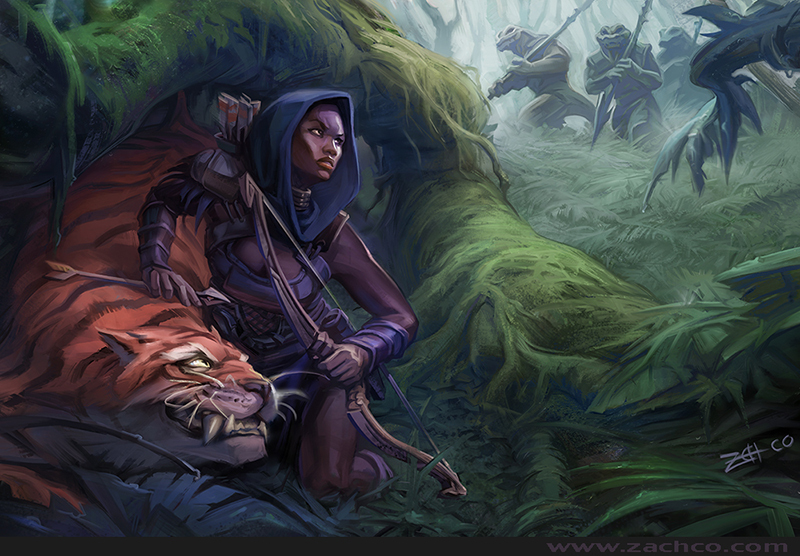 But then you are no longer hidden. And no, no you cannot simply re-hide in the same place. That leads to a really abusive use of hiding. Once a hidden creature makes an unseen attack (unless the have the Skulker feat and miss with the attack, in which case you remain hidden), then they are seen and need a new hiding spot. So the PC must move to a new position, and once again try to use their stealth to drop out of sight from their target.

The rhythm of the Rogue: Shoot, move, hide. Shoot, move, hide. Put that Cunning Action to work for you and hide every round. I don’t care if that is back and forth between two spots of darkness, or two different thickets of bushes, but that is what has to happen. This prevents hiding from being a non-magical version of invisibility. But talk with your DM about this. They may be more cool with you re-hiding in the same spot.

4. Get Hidden Before the Fight Starts.

You also need to learn to hide so that your party gets a surprise attack round as often as possible against as many targets as possible. This is too good of a rule to miss out on. The way it works, before you roll initiative, the DM calculates if anyone who is hiding and trying to make a surprise attack is stealthier than the passive perception of their quarry. Anyone whose Passive Perception is below the Stealth roll of an ambusher misses their turn in the first round. All it takes is just one successful stealth check. JUST ONE!

“The DM determines who might be surprised. If neither side tries to be stealthy, they automatically notice each other. Otherwise, the DM compares the Dexterity (Stealth) checks of anyone hiding with the passive Wisdom (Perception) score of each creature on the opposing side. Any character or monster that doesn't notice a threat is surprised at the start of the encounter.” - PHB, The Order of Combat

If you're surprised, you can't move or take an action on your first turn of the combat, and you can't take a reaction until that turn ends. A member of a group can be surprised even if the other members aren't.

This is a big boon to the party. Even if just you, the stealthiest character in your party, hides before a fight and then surprises three out of the five goblins that approach, then those three goblins all miss their first turns, even if your party’s clanky paladin surprised no one.

Learn to take the hide action as often as you can, and take your game play to the next level.