How To Play A Short Game: The 1-on-1 Fight Night

In our recent episode, Gem Dragon Bloodline: A Spphire Sorcer Build, we talk about how we've been running a mini 1-on-1 adventure. So let's have a look at how you too can have some D&D fun, even if you can only find one friend to play the game with.

Decide who is going to DM and who is going to have a character in the fight. Talk about the sort of character you want to test out in battle. It helps to think of this as a bit of a playtest. Regardless of whether the character wins or loses, the player should learn lots about what works well with the build and what doesn’t. This might be a useful game to play before you start a big campaign with a character, so you can decide if it’s really as good as you hoped. 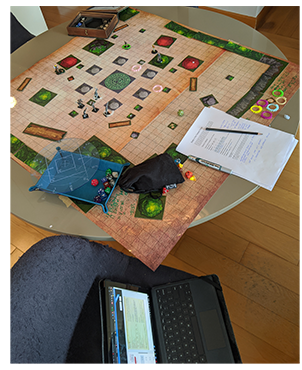 Second: The DM needs to come up with a fight scene.

We use a dry erase battle map. It’s fast and easy to draw out an improvised fight setting. If you have something like Dungeon Craft tiles, or even some fancy 3D terrain from a company like Dwarven Forge, then by all means build whatever you like. This should be fun for the DM. If you ever get the feeling that building the scene is too hard, simplify. Just go back to drawing something on graph paper or a battle map. It takes very little for this to be a fun session. Don’t let prep ruin your good time.

Pick a suitably nasty monster or two. I recommend matching the character’s level with an equal CR value. If you add a couple more minions, consider also giving the player a sidekick. On average, the PC should probably win this. So the DM needs to play the baddies very strategically. The trick is to make it a close fight.

Third: Try out the sidekick rules.

Sidekicks are becoming a staple across many official D&D offerings including, Divine Contention, Dragon of Icespire Peak and Storm Lord's Wrath. There are UA rules for Sidekicks. And they are in the Essential Kit too.

Sidekicks can not only help in a fight, but can offer an opportunity for some witty banter. We play so that while the player decides what the sidekick does, the DM voices the sidekick, so they can have a funny relationship with the player. We have even picked up a couple fun sidekick supplements from the DMsGuild. I recommend Droop's Monster Manual of Sidekicks if you are looking for a more unusual creature to hangout with your PC. However you decide to do sidekicks, choose a level suitable for the fight, (probably best to err on the side of a little higher than lower). And then give them a healing potion in case of emergencies. If the PC goes down, the sidekick still has a chance to revive them.

Also, if you want to bring a bit more social interaction into the 1-on-1 fight, then you can allow short dialog as an additional free action on each turn, as well as a free verbal response from the opposing side — assuming they are the type of creature that talks.

If you do fight night a lot, just fighting to the death gets a bit boring. Mix it up. Make a payload protection scenario. Or require the PC to destroy a McGuffin to close a portal. Or whatever. Whatever you build, keep the character in mind. Remember to design a scenario that allows the player to test out the character’s special features. Especially if you are playtesting anything that is homebrewed — you definitely want to get a sense if it is too overpowered, or clunky mechanically.

Grab your stat blocks and character sheets, drop some minis on the board, and roll initiative. We sometimes do a bit of a pre-roll chat about how the character got here and why. The set the scene with a bit of music. And have fun.

A word of warning: the higher the level of character you put into this situation, the longer this game will go. The last time we played a 20th Level fight, it took more than 4 hours before it ended.

(Credit: Header Image from the "I cast fist" meme)